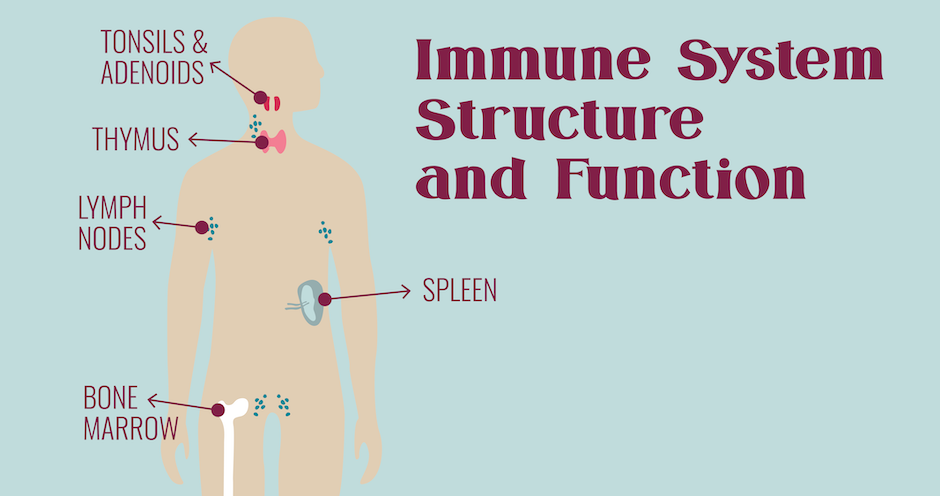 By : Lindsey Elmore April 28, 2020
I'm Lindsey, I make science fun, and teach you how to make choices about health and wellness.

The main tasks of the immune system include:

Organs of the Immune System

Hematopoiesis, or formation and development of blood cells, occurs in the bone marrow. The process involves differentiation of stem cells into mature cells of the immune system, like T cells, B cells, granulocytes, natural killer cells and leukocytes. Additionally, the bone marrow also manufactures and releases immature lymphocyte precursors, as well as red blood cells and platelets.

Immune cells are specially programmed to respond to antigens. Antigens may be soluble substances, such as toxins and foreign proteins, or particulates, such as pathogens and mutated tissue cells.

Lymph nodes are specialized masses of tissue situated along lymphatic system pathways. They filter lymph fluid before returning it to the blood. Lymph comprises the interstitial fluid that surrounds cells. A network of lymph vessels collects this fluid throughout the body and directs it toward lymph nodes. This process is vital for proper immune system function. When the lymph nodes detect antigens in the lymph, B-cell lymphocytes become activated to create antibodies specific to the offending antigen. Once these antibodies attach to the antigen, it is “tagged” as an intruder for destruction by other immune cells.

Learn how to help keep the lymphatic system moving in this post, DIY Lymphatic System Tune Up.

The human body has around 500-600 lymph nodes. If you have to have some lymph nodes surgically removed due to infection or cancer, most likely this system will compensate and you’ll be just fine. Occasionally, some people experience side effects after a lymphadenectomy.

Sometimes, removing lymph nodes can make it hard for your lymphatic system to drain properly and lymphatic fluid can build up and cause swelling (lymphedema). This most commonly occurs in the arms, hands, breasts, or torso on the affected side of the body. Lymphedema is more likely if you get an infection because your body will produce extra leukocytes and lymph fluid to fight the infection. Take care when cutting cuticles and shaving your underarms, and do your best to avoid cuts, scrapes, and burns (including sunburn) following lymph node removal.

The thymus gland, which is located behind the sternum, is also involved in the production of immune cells. About half of the immature lymphocyte precursors generated in the bone marrow reach the thymus, where they specialize into T lymphocytes or T cells. The thymus also plays a role in endocrine function and secretes some hormones, such as melatonin and insulin.

This glad is most active from fetal development until adolescence for the training and programming of T cells. After puberty, the gland gradually shrinks and performs a less vital role in immune system function.

Removal of the Thymus Gland

The primary reason for a thymectomy in a patient is the autoimmune disease Myasthenia gravis. Because this disease is most common in adults, removal of the thymus often has little or no side effects. However, if the thymus is removed in infancy or childhood, it can have more profound effects. These include an increased risk of infection, autoimmune disease, and atopic diseases, like allergies, asthma, and eczema, as well as the risk of cancer, as T cells perform a vital role in cancer prevention.

There is also some evidence that removal of the thymus gland may be associated with premature aging of the immune system.

One of the main tasks of the spleen is to filter your blood. It breaks down and removes abnormal, old, or damaged cells. The spleen also stores healthy red blood cells, platelets, and leukocytes (white blood cells). When the spleen detects infection in your blood, it produces and releases lymphocytes.

Because all of your blood filters through the spleen, it acts as an immunologic filter, trapping foreign materials and blood cells that no longer perform their jobs. When antigens come into the spleen via the bloodstream, B cells in the spleen are activated to produce antibodies.

Removal of the Spleen

A person may have his/her spleen removed following an accident that damages this vital organ. While you can live without a spleen, it does play a major role in immunity. Studies show a 2- to 3-fold increased risk of developing certain illnesses after a splenectomy, including pneumococcal pneumonia, other pneumonias, meningitis, and septicemia. Additionally, researchers found an increased risk of thromboembolism and cancer as well.

We are born with three sets of tonsils: pharyngeal tonsils, commonly known as adenoids, lingual tonsils on the tongue, and palatine tonsils.

Palatine tonsils are the oval clusters of lymph cells in the pharynx, while adenoids reside in the sinus cavity above the hard palate of the mouth. Like goalies in the back of the throat and nose, they trap bacteria and viruses inhaled through the nose and mouth. Immune cells present in the tonsils produce antibodies to destroy these pathogens and prevent them from passing into the lungs. In this way, our tonsils are our body’s first line of defense against many pathogens.

Removal of Tonsils and Adenoids

Frequent throat infections can cause enlargement of the tonsils and adenoids. This may result in obstructed breathing and blockage of the eustachian tubes. Frequent ear infections and snoring are common symptoms of tonsillitis. For most children, tonsillectomy will bring relief from ear infections, but at what cost? A population-based cohort study of almost 1.2 million children found an association between adenoidectomy and tonsillectomy surgeries and increased long-term risks of respiratory, infectious, and allergic diseases in adulthood.

Removal of the Appendix

Appendicitis results from obstruction of the appendiceal lumen. The most common causes of obstruction include inflammatory bowel disease (IBD) or infection. Less commonly, appendicitis can result from severe constipation or impaction, parasites, or foreign bodies. Because appendicitis is potentially life-threatening, the vast majority of cases result in appendectomy.

Long-term side effects of removing the appendix are rare. A systematic review revealed an increase in the risk of Crohn’s disease following appendectomy, but the risk was slight. The same review reports a decreased risk of ulcerative colitis.

Peyer’s patches are small masses of lymphatic tissue found in the small intestine. While not essential to overall immune system function, they do play a role. Their primary job is to monitor intestinal bacteria and prevent the growth of pathogenic bacteria in the intestines. Antigens in the small intestine cause lymphocytes from the Peyer’s patches to trigger an immune response by producing antibodies.

Removal of the Peyer’s Patches

Removal of the Peyer’s patches is extremely rare. In animal studies, researchers found that animals can survive after their removal. However, a decreased immune function was noted. In another study, researchers concluded that Peyer’s patches play a role in the body’s defense against protein haptens.

Prevention is always the best medicine. Check out 7 Ways to Naturally Boost Immunity.

Looking for a supplement to add to your immune system wellness routine? Come learn about ImmuPro! 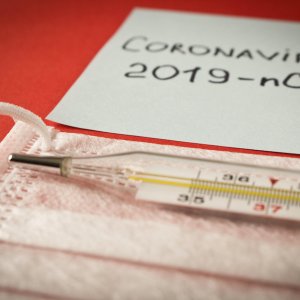 Protecting Yourself from Coronavirus